Shave for the Brave 2018 Recap 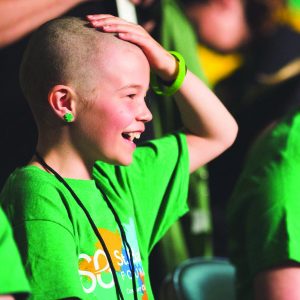 Madelyn is in the sixth grade, 11-years-old, and currently has a bald head. This is her third year shaving her head to support childhood cancer research at the Shave for the Brave event hosted by the Northern Nevada Children’s Cancer Foundation. Before each shave, Madelyn experiences a mixture of nervousness and excitement.  Although it can be a bit nerve-wracking, she does it in support of her grandmother who recently battled leukemia. 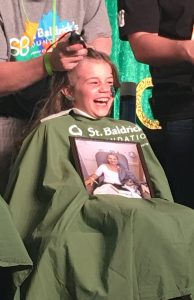 Madelyn’s mother, Laurie Bowman, explains that her daughter has a very special relationship with her grandmother, “Madelyn is a “mini-me” of her grandmother, Marilyn,” she said. “She calls her every morning and fills her in on everything.”

Madelyn is the captain of her team the “Shampoo Savers” and is driven to one day be “Knighted” on stage – an award given after shaving for seven years.

At the Reno event on March 16, 2018, more than 240 people shaved and nearly $200,000 was raised for childhood cancer research. The fundraising cutoff for this event ends in July.  If you are interested in helping NNCCF and the participants meet the $200,000 goal click here.

The annual Shave for the Brave event at the Reno Ballroom gathers participants from all walks of life. There are numerous reasons why people are motivated to raise money and shave their head for childhood cancer research, Madelyn’s story is just the tip of the iceberg. Many teams have grown over the past 11 years and one of the largest teams is Kylee’s Wish with 46 participants who collectively raised $38,365 this year.

Teams gather and work together to broaden their fundraising reach and inspire people to get involved. Team Kylee’s Wish and team Scientific Games hosted a barbeque, raffle and silent auction, and team Sparks Firefighters held a pre-shave for families, friends, and civil servants unable to attend the big event.

It is astounding to witness the support in the Reno, Sparks, and Tahoe communities for childhood cancer research. Childhood cancer is the number one cause of death by disease for children in America.  But thanks to research and better therapies, more than 80% of U.S. childhood cancer patients now become long-term survivors.
Here’s a video by Jason Bean with the Reno Gazette Journal.