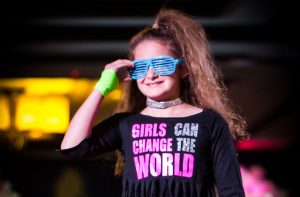 Sofia, dressed in a black and pink ensemble with teased hair and “Girls can change the world” top, was nervous before she took a step onto the runway.

She’s a ten-year-old retinoblastoma survivor and showed the crowd what it looks like to be an inspiring cancer survivor.

“It was a good nervous,” said Sofia. “I knew a few minutes later, millions of – oh not that many people – lots of people would be staring at me.”

The 10th annual Runway for Life Fashion Show was last Sunday at the Atlantis Casino Resort Spa in Reno. Mom’s on the Run included childhood cancer survivors in a runway event to support women diagnosed with breast and gynecological cancers.

The fashion show empowers women and children alike to be confident in their own skin. Sofia enjoyed being a part of the fashion show and her favorite part was being cheered for. 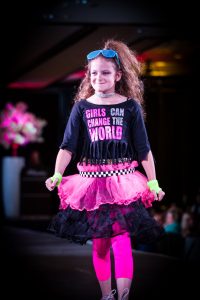 “It made me feel like I mattered,” said Sofia.

Sofia was diagnosed with retinoblastoma a couple weeks before her second birthday and lost her left eye from cancer. She has had three prosthetic eyes and has re-sizing appointments to keep up with her growth spurts.

Desiree, Sofia’s mother, explains the importance of inspiring self-confidence in her daughter as she gets older and nears going into tomiddle school.

“We fight extra hard to instill confidence in her and tell her that her physical effects from cancer are marks of strength and beauty,” said Desiree. “The blessing is that she is learning early that everyone has ‘something’ that is hard for them, hers just happens to be on her face.”

The Runway for Life Fashion Show is an example of a positive atmosphere inspiring community support.

“It’s incredible to have an experience where she can tangibly feel the truth of those statements,” said Desiree. “She gets a chance to feel beautiful and celebrated exactly the way she is, prosthetic included.”