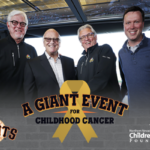 July 22, 2020 | Category: Dozers & Dirt, Press Release
Press Release – Dozers & Dirt Fundraiser 2020 Canceled Due to COVID 19 (Reno, NV) – It is with great sadness that we announce the Dozers & Dirt fundraiser benefiting Northern Nevada Children’s Cancer Foundation (NNCCF), has been canceled due to COVID 19. The committee hoped we could hold the event later in the summer […]
Read More

June 19, 2020 | Category: Fundraiser, NNCCF General | Tags: Amazon Shopping, Amazon Wish List, AmazonSmile
Shopping on AmazonSmile is an easy way to support local children battling cancer at no extra cost. If you are planning on shopping online through Amazon, choose AmazonSmile instead. You can shop for products you love while supporting NNCCF and the children we serve. Launched by Amazon.com in 2013, AmazonSmile offers over one million different […]
Read More

Finding a Community Through Childhood Cancer

May 29, 2020 | Category: Featured Story, Our Stories
Finding a Community Through Childhood Cancer Elizabeth and her family were beginning a new chapter in life when they relocated to Reno for her dad’s new job. Little did they know that only days after they moved to the Biggest Little City, their story would include childhood cancer. Their belongings were still tucked away in […]
Read More