At two-years-old, Kyla was active, healthy, and rarely sick. Her parents and 5-month-old little sister knew that life was extremely precious, but they were unaware that they would soon cherish each day even more. A few days after Thanksgiving in 2015, Kyla experienced typical cold symptoms, but after a week her symptoms worsened. “I knew something was wrong the second the pediatrician walked back into the check-up room after completing the hemoglobin test,” said Shelby, Kyla’s mother, “The pediatrician informed me that she was very concerned that Kyla might have leukemia.”

After 6 days of tests, Kyla was officially diagnosed with cancer. “Kyla’s diagnosis turned our world upside down,” said Shelby. Kyla and her family all slept in the hospital for her first two weeks and continued to stay near the hospital for the following two months. They were unable to return home to Incline, Nevada, until February 2016. “We could not have emotionally gotten through those first 2 months without the love and support of our family, friends, NNCCF, and our community back home,” said Shelby.

Kyla received two and a half years of chemotherapy infusions, and for the first ten months, their family spent most of their time at home or in the hospital. “We worried about her blood counts, we worried about her catching a cold or getting an infection, we worried about how the chemo would negatively affect her health in the future, we worried about everything,” said Shelby. They kept visitors to a minimum and stayed out of public places until Kyla’s immune system was less compromised.

Kyla’s family settled into their “new normal” and made the best of their situation. They found a lifestyle that fit their needs and focused on keeping Kyla healthy through treatment. “We have put all our hearts and efforts into making sure Kyla thrives through her cancer treatments and continues to thrive through life,” said Shelby, “Overall, Kyla’s cancer diagnosis has empowered us to be the best and healthiest versions of ourselves.” 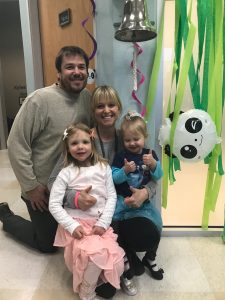 On February 27, 2018, Kyla entered NNCCF ready for her special day. Kyla came in to ring NNCCF’s “No More Chemo Bell.” Streamers and panda balloons decorated the office, while family and staff waited to witness her ring the shiny silver bell. As everyone cheered, Kyla quietly walked up and rang the bell, then wrapped her arms around her mom for a hug. “Making it to the end of treatment and watching her ring the bell was a very emotional time for our family,” said Shelby. “We are so blessed and grateful, and we are so excited for Kyla’s future.”

Kyla’s family is thankful for the support from NNCCF and the community, “I could not imagine fighting this fight without them by our sides.” NNCCF was able to support them financially, as well as connect them with other local families facing childhood cancer. “NNCCF made it possible for us to focus all of our energy on taking care of our daughter and making sure she thrives,” said Shelby.

Kyla is flourishing and loves playing dress-up with her little sister. She has been practicing writing her name in preparation for kindergarten next year, and is currently learning to ski. 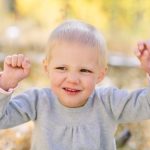 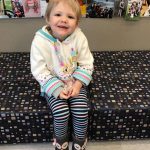 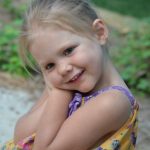 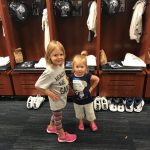 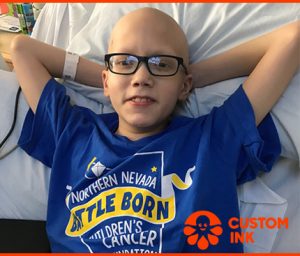 Get your NNCCF swag today through Custom Ink. Hoodies, long sleeve shirts, tanks and tees are available now. Proceeds from this fundraiser help our local Battle Born kids affected by cancer.
Click here to check out the swag 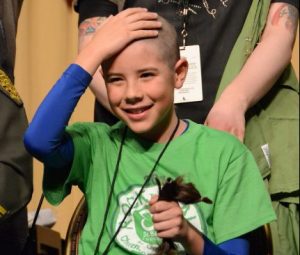 Shave for the Brave Recap