In November of 2016 Emma went in for a routine physical in order to try out for her high school varsity basketball team. Little did she know that it would be an 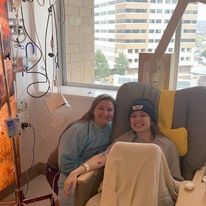 appointment that would both change and save her life. After noticing the vision in her right eye was significantly worse than her left, a trip to the eye doctor was in order. When the routine appointment seemed a bit more thorough than usual, Emma and her dad knew something was out of the ordinary, and that’s when they were directed to go to the hospital for a CT scan and MRI. A week later Emma and her family were introduced to a neurosurgeon and informed that she had a golf ball sized tumor wrapped around her optical nerve and needed brain surgery ASAP.

On December 15th Emma made the trip to Oakland Children’s Hospital to undergo a 13 ½ hour brain surgery the next day. The tumor was nearly inoperable, but Dr. Sun was able to biopsy it and restore blood flow to her eyes in order to prevent the cancer from blinding her. She spent a week in the ICU after the operation to recover and it was not an easy road. Emma experienced a seizure and mini stroke leaving her paralyzed on the right side of her face, right hand, and it affected her speech. Thankfully these issues were solved with physical therapy in the hospital and she soon regained all of her original function. Finally, on Christmas Eve she was released to go home while the doctors figured out the next steps in her treatment plan.

In January of 2017 Emma took another trip to Oakland to get her chemo port inserted in her chest and receive her first dose of chemotherapy. It seemed to be smooth sailing until her first MRI. A tumor on her spine had been detected, but the doctors decided to stay with the course of treatment she was on. A few weeks later the tumor on her spine metastasized down the bone, which brought up the threat of paralysis. With this information a decision was made to increase treatment which would put Emma in the hospital for an 8-hour drip on a very harsh form for chemotherapy. After a year and a half of treatment Emma’s scans showed that her brain and spine tumors were at the size where loss of vision and paralysis were no longer a concern and doctors declared her cancer free! 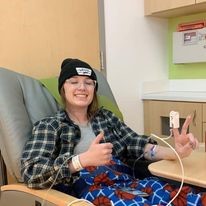 In 2019 Emma rang the no more chemo bell after having her port removed to celebrate beating brain and spine cancer. She was a junior in high school excited for what the future had to hold. Receiving scans every three months to monitor progress it seemed as if the light at the end of the tunnel had finally arrived. However, in March of 2020 things took a turn for the worse, when she woke up one morning with one of the worst headaches she had ever experienced. She was taken to the hospital where they determined she needed to be rushed into emergency brain surgery. With a serious case of hydrocephalus and her brain beginning to swell due to the massive amount of spinal fluid in her ventricles, Emma had a medical shunt placed in her brain the next day in Oakland to release the built-up pressure under her skull. The hydrocephalus was a side effect of her brain tumor coming back and blocking the drainage system in her brain. After 5 days in the ICU Emma went home and was officially diagnosed with brain and spine cancer for the second time. 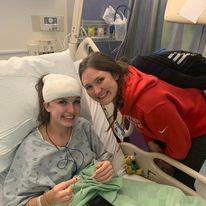 With the impacts of the COVID pandemic at the same time as the beginning of another round of treatment, her parents and sister would take turns going to chemo therapy appointments with her, as visitors and support people were limited access to the hospitals. Emma graduated high school and started her first year of college at the University of Nevada, Reno. Due to the frequency of treatment a port was put back into Emma’s chest to make infusions and treatment a bit easier on her and her medical care team.  She had three different chemotherapy’s and participated in two clinical trials for a year and a half when finally, the tumor had shrunk to a non-threatening size and once again Emma was declared cancer free.

Today, Emma is still receiving MRI’s every two months to monitor any growth and she has had her port removed once again. She is going into her junior year at the University of Nevada, Reno for degree in marketing with a minor in sports management.  She is currently interning at the Northern Nevada Cancer foundation supporting marketing efforts with hopes of working in non-profit and would love to one day coach college sports as a career. 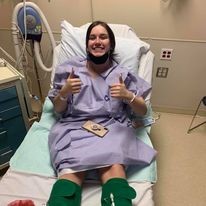 Although Emma has been diagnosed with childhood cancer twice and has spent the last six years undergoing treatment to fight brain and spine cancer, she says she wouldn’t take any of it back. “The amount of amazing people I have met and opportunities that have been presented to me have been life changing, and I hope to be able to make a difference in my community and give hope to other children fighting cancer.”