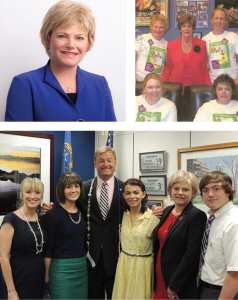 Northern Nevada Children’s Cancer Foundation (NNCCF) is pleased to announce the appointment of Shirley Folkins-Roberts as the new Executive Director. Shirley has been a dedicated advocate for children with cancer since 2003 and has a longstanding history with the foundation. She is a co-founder of NNCCF, served on the Board of Directors, and led teams of Nevada families to Washington D.C. to advocate for childhood cancer research funds. In her Executive Director role at NNCCF, Shirley will continue to procure sponsorships, oversee event logistics, advocate for more research funding, and help northern Nevada families navigate their journey through childhood cancer.

Shirley comes to NNCCF with a background in northern Nevada’s development industry and worked for Panattoni Development Company. Since 2014, Shirley has been involved in more than three million square feet of commercial real estate development. Shirley became a member of the California Bar in 1993 and the Nevada Bar in 2010 and has practiced with private firms in both states. She is an active member in the community helping organizations and serving on various boards such as Rotary Club of Reno Central and REMSA. The Board of Directors and NNCCF staff are excited to see her shine in her new role at NNCCF. 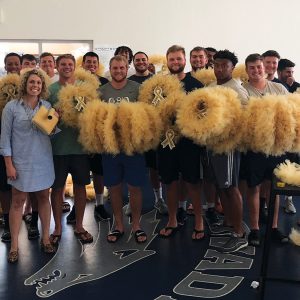 On September 1, NNCCF kicked off the annual Know the Gold campaign by asking community members and supporters to “Go Gold” for Childhood Cancer Awareness Month. More than 100 businesses participated in raising awareness by hanging gold ribbon wreaths at their business and many included a fundraising element.

The Know the Gold Campaign is a 5-month-long community campaign to raise support and funds for northern Nevada families affected by childhood cancer. This year, the William N. Pennington Foundation will be matching donations dollar-for-dollar up to $300,000 through January 2019. To get involved, donate, or host your own fundraising event, visit nvchildrenscancer.org/knowthegold for more information. 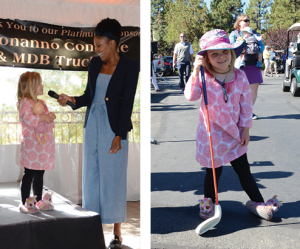 We are incredibly grateful for another successful Tournament of Hope at Montreux Golf and Country Club. NNCCF celebrated its 14th annual golf tournament on September 18, 2018, and heard an amazing story from Juniper – she shared her journey with childhood cancer and was the first to tee off for the tournament. This year, 152 golfers raised more than $100k to support local families and children, like Juniper, affected by childhood cancer.

Thank you to our Tournament of Hope Sponsors